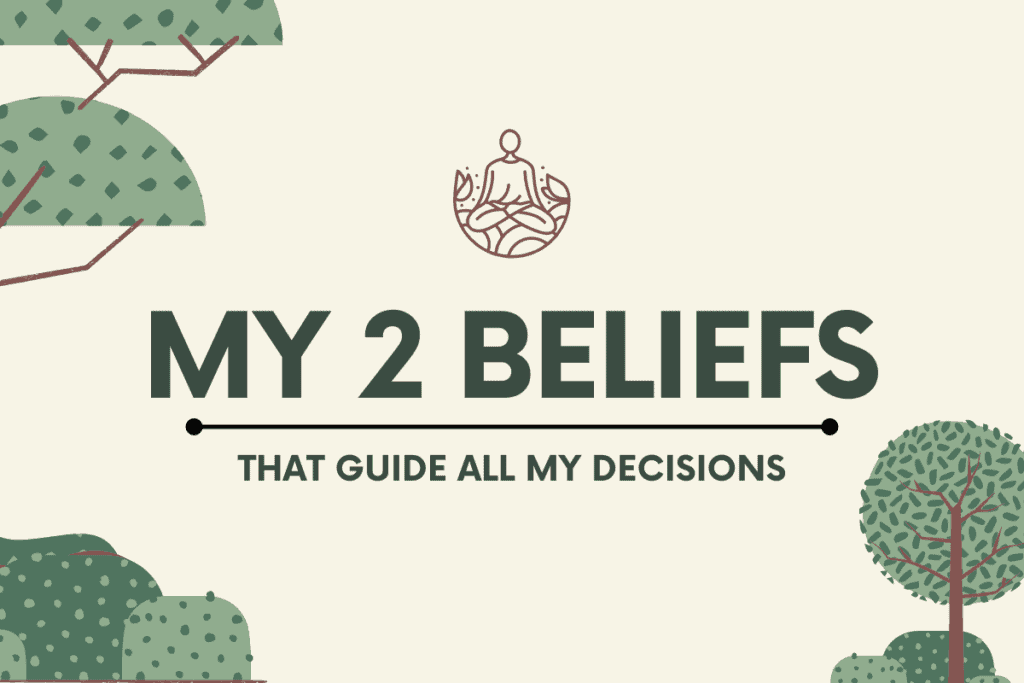 My 2 Beliefs that Guide All My Decisions

Let’s start with a story. The story of how I first came across and experienced the power of repeating a statement/belief to yourself over and over again.

When I got my first car, I went to Metro Cash & Carry and I was looking for accessories for my car. And one of the things on my list was to find an air freshener that would really make me feel at home when in the car.

I was going through the options and then my eyes came across an air freshener. It was that air freshener which had a Huge Impact on the way I saw the world after that. I hung that inside not only my first car but my second car as well. Even though the smell faded away eventually, the inspiration from the words never did!

If you Change Nothing, Nothing will Change:

Let me share with you in detail how these words made me feel. And how they’ve helped me so many times whenever I felt stuck or whenever I felt down or needed some motivation.

The statement itself is very simple. But if you think about it long enough, it has a huge depth to it. What it really means.

This has helped me in my life SO SO SOOO many times. Let me share some examples:

Whenever everyone else around me would tell me not to do something because they didn’t understand it. Or whenever they asked me to do it in the exact way it’s always been done. I’d remember this and I’d think to myself, if I just accept everything as it is. And if I agree with everyone who is afraid to try anything new. Who says, Don’t risk anything at all. Where would I be?

And the answer would always be, If I keep doing the same thing that everyone else around me is doing, I would just end up the same way they did. Do I want that? The answer mostly was A WHOPPING NO! I wanted to do my own thing in my own way.

Even though that meant feeling foolish, alone or failing sometimes. That was all fine. As long as I knew I was doing what I really wanted to, the results didn’t matter. The struggle/challenge alone were enough to get me going.

I kept this hanging in my car for Years until it became a habit of mine. Now whenever there’s a situation in which I feel stuck or I’m at the edge of making a decision. I would repeat these words to me and I would know what I really want to be doing.

I repeated these words to myself when I was trying to decide if I should keep my safe & secure Government Job. Or should go on an adventure instead and do my own thing? And we all know how that ended. Best decision of my life to leave that job!

The second belief comes from my childhood. I was trying to fix the printer for my grandfather (YES! I was always a tech geek). After trying some stuff from the a little knowledge I had back then, I turned to my grandfather and told him I can’t find a way to do it. Or in other words, that It can’t be done.

And what he said in answer didn’t make much sense to me back then. But every time I feel stuck now, I remember these words and these have an instant effect on the way I’m approaching a problem. Here’s how it works:

Just knowing that other people who are just like me, have been able to solve this problem in the past. And specially in the age of internet, not only everything has been solved but the solution has been uploaded on the internet as well! Yes, it might be difficult, complicated or overwhelming at first. And maybe you won’t be able to do it right away. But just having the knowledge with you that There’s Always a Way changes the way I look at problems.

The same problem that felt impossible to me just a while back, becomes a fun challenge to solve. Instead of focusing on all the ways the given task is difficult or seems impossible, these words help me instantly change the way I look at the situation. These words make me instantly focus on the Solution instead of the Problem.

And perhaps most important of all, it’s only difficult or overwhelming the first time you try to do it. Once you’ve learned the solution, you’ve learned it for life! That knowledge will always be with you and it won’t be a challenge next time you face the same problem.

That’s it for today. I wanted to keep this week’s post short. Short but really game changing. I wouldn’t be who I am and where I am without these 2 ways of thinking that I’ve adopted. I’d love to hear what words inspire you or if you use something similar in your life!

See you guys in the next one! And as always, if you have a specific question you want me to write a blog post about, Get in Touch with me and I’ll try to write a future blog post around that topic!

Subscribe to my email newsletter for my exact strategies to overcome your barriers and winning big with freelancing!

5 Books that Changed my Life

5 Amazing Lessons I Learned from Traveling

I Lost 1 Crore Rupee because of These Mistakes

My 3 Year Journey with Therapy

This Week, We Leave Planet Earth

My 2 Beliefs that Guide All My Decisions

It’s easy: all we need is your name & email to get started for FREE.